What’s one question you need to stop asking? It’s one that’ll make you restless until you do something about it. The answer?

As an INFJ, you know what it’s like to come up with an idea or vision you’re excited about only to put it off or keep it to yourself because of fear: fear of failure, fear of friends and family not understanding, and fear of wasting time.

I spent too long keeping my ideas to myself because I worried about what people would say. I wanted to know for sure that they’d like my work even before I started. Additionally, I feared wasting time.

But eventually, as I grew more and more unhappy keeping my ideas to myself, inner turmoil forced me to confront that question – What if?

Why is it so hard to put your ideas into the world? Why do we think this way? And what can you do about it? 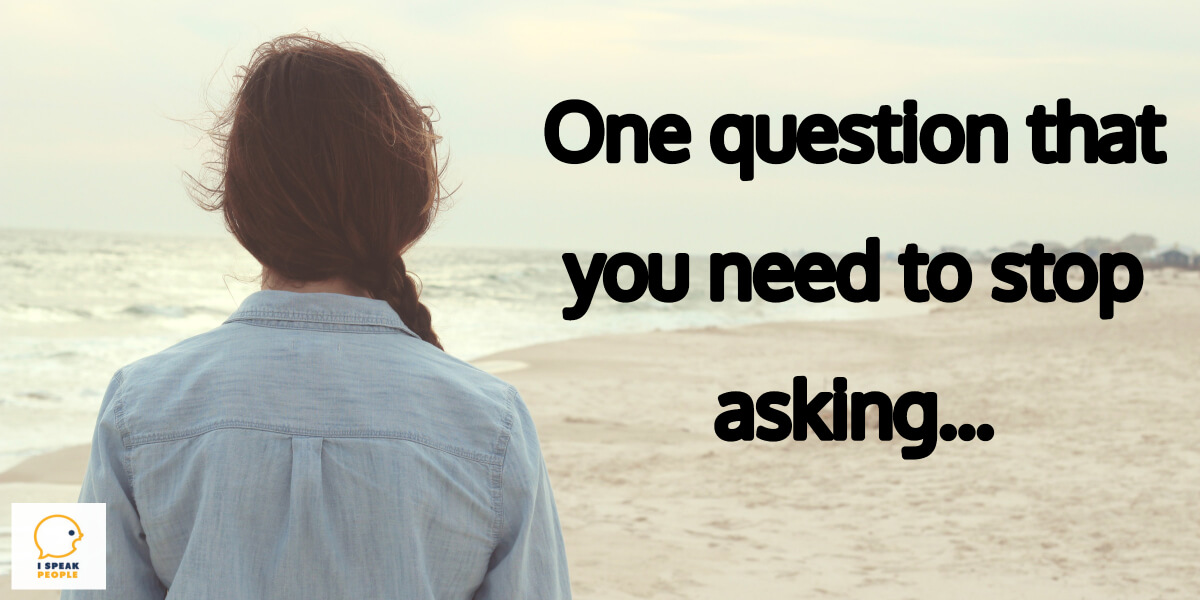 Why We Stop At the Idea Stage

We stop at the idea stage for at least three reasons.

1. Keeping ideas in your head is safe.

You, fellow INFJ, have an incredibly creative, imaginative mind. You can picture the end result of your work, whether it’s a finished book, a recorded song, an attractive website, a happier client, a better relationship, or something else. And because you can see the end results of your idea so vividly, you have high expectations for what it will look like in reality.

Sadly, when we try to bring the ideas in our heads to life, they almost never turn out exactly how we pictured them. The only way to keep them pristine and perfect is to lock them away in our heads, where they’ll be safe. But then no one else will ever enjoy or benefit from them.

2. We fear of what other people will say.

INFJs are tuned into what people think. We often care as much about keeping family, friends, and coworkers happy as we care about pleasing ourselves. While serving and looking out for the interest of others is a good thing, pretending to be someone else to please other people is not.

Most of the people in this world think differently than we do since we only make up one to two percent of the population. Every day, we’re confronted with the truth that we’re different. Unfortunately, it’s far too easy to give in to other people’s demands and expectations to act like they do, while we’re left feeling restless.

If you’re anything like most INFJs I know, you have many interests and are likely passionate about several of them. Focusing on one idea, vision, or passion and bringing it to life would require you to put off other interests for a while. But then, what if you’re missing out on your real calling?

I wrestled with this challenge for a while. I wanted to be a songwriter and a writer. For a long time, I tried to do both for fear of missing out. But my lack of focus kept me from making any real progress on either one.

What Happens in Your Mind

In her book, The INFJ Writer, Lauren Sapala says many INFJs struggle with the writing process because the stories they have in their heads seldom turn out how they pictured them. The process of taking what you can see clearly and putting it out into the world is messy and painful. Sapala compares it to giving birth.

Even if you’re not a writer, the birth metaphor applies to you too because bringing any idea to life can be painful. In your personality, your creative side, introverted intuition (Ni), is highly developed. It enables you to visualize a final product. In contrast, the mental processes that help you get your ideas into the world – extroverted feeling (Fe) and extroverted sensing (Se) – aren’t nearly as strong.

When you’re writing or helping someone, or playing an instrument, painting, creating, or performing, you have to funnel your ideas through your Fe or Se. And as you do this, important details and parts of your ideas get lost in translation. You can never completely help another person see exactly what you see.

What to Do About It

As hard as it can be to grapple with the disparity between what’s in your head and the way your work turns out when you put it into the world, it’s still important that you put it out there. Doing so is the only way to silence your What if?, reach your potential, and help people to the best of your ability.

Your first attempts to share your ideas and make them a reality will always be discouraging, but keep trying anyway!

John Maxwell tells the story of a ceramics teacher who ran an experiment with two of his classes. He asked one class to spend an entire semester making a single perfect pot, while he asked another to make as many as possible. The first class studied pot making for hours. The other got to work making pots.

At the end of the semester, when the teacher evaluated each class’s work, it was obvious that the second one had produced superior pots. While the first group had learned a great deal, only the second spent time honing their skills, learning from their mistakes, and producing pots.

Before I launched a podcast that people were interested in, I created three others. My first book was a flop. And this is at least my fourth blog.

Each attempt has taught me something, and I’ve come to appreciate it. What are you holding back on that you need to go for? What “What if?” do you want to silence?

This world needs to hear from you.