How can you tell if you’re an INFJ or INFP?

I’ve gotten this question a lot lately, and it’s a good one. At first, it can be hard to tell the two apart because they do seem to share a lot in common. For a long time, before I got a better understanding of the Myers-Briggs personality system, I thought that I was an INFP. If you’re struggling to tell the difference like I was, there are some clear ways to tell the two personalities apart.

We’ll discuss 7 in this article. 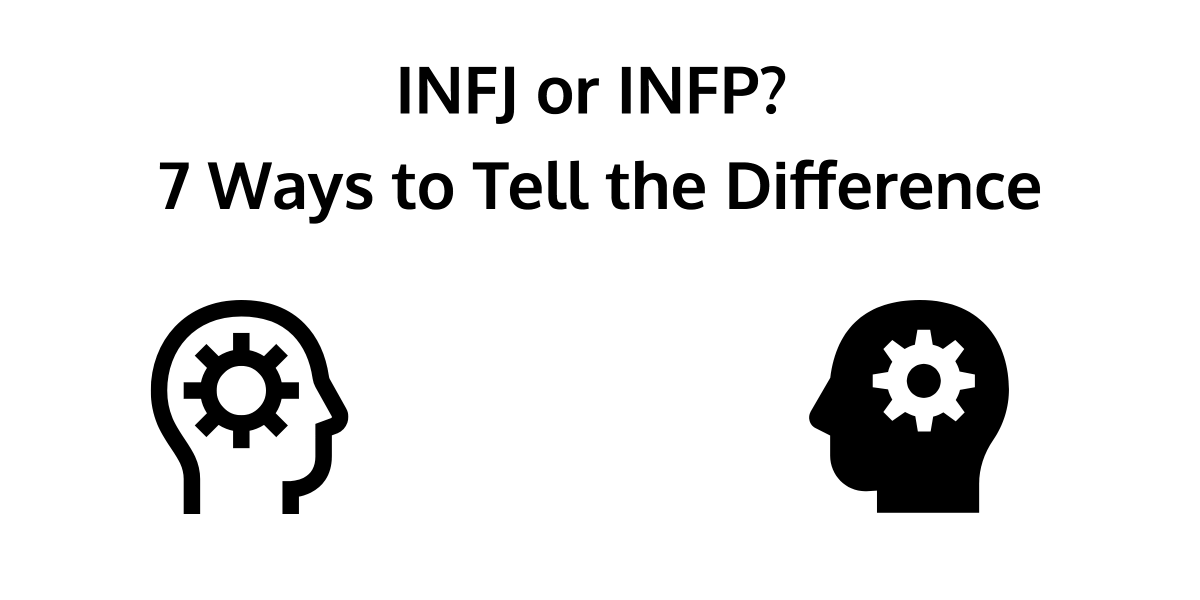 1. The Way You Use Intuition

INFJs using Ni tend to prefer to think alone and then, after pondering, share with others. They need long periods of intense concentration on a topic to do their best thinking. While they come up with ideas regularly, they tend to narrow their ideas down and go extremely deep. These proclivities are a result of Ni’s introverted direction.

By contrast, INFPs’ Ne thrive’s in group settings where it can feed off of the different suggestions and thoughts of others. The more material there is and the broader it’s range, the better. Additionally, Ne is sometimes likened to a popcorn maker: when it warms up, ideas multiply and come fast and furious like little white puffs flooding the glass containers at movie theatres. These tendencies are the result of Ne’s extroverted direction.

2. Your Special Kind of Feeling

While both types are concerned with personal values and the needs of people, INFJs tend to focus first on how decisions will impact the harmony of a group. As Fe users, they focus on pleasing others. Furthermore, they’re often more tuned into other people’s feelings than they are their own. For this and other reasons, they have a hard time figuring out what they’re truly thinking and feeling and usually need other people’s help to sort through all that’s going on in their heads.

INFPs, on the other hand, use Fi and focus on pleasing themselves first. This is not to say that they’re not sensitive to or considerate of others’ needs. It’s just that, at their very core, they long to be true to themselves, their identity, and their strong personal values. This can be said of INFJs too, but INFPs typically have a better grasp of their own emotions and what they’re thinking and feeling. In fact, they’re among the types who have the broadest and most well-developed palette of emotions. They can empathize with others by thinking of similar experiences they’ve gone through and using their past feelings to make a personal connection.

3. Your Variety of Thinking

INFJs tend to be relatively logical thinkers due to their Ti. While they’re definitely feelers, they balance their feeling and thinking functions well. So if you’re an INFJ, you’ll likely have the ability to explain your intuitive ideas in a logical way. You may also really enjoy efficiency and productivity, and you’ll probably hate any rules that seem pointless and restricting. Another effect of Ti is that you’ll desire a level of independence in your work where you can have control over the process and the product.

INFPs’ Te, by contrast, often shows up in their communication. Because they introvert their feeling (Fi), they extrovert their thoughts via their Te. This can make them sound like thinkers at times. Typically, Te is concerned with systems, rules, and procedures as well as calculating times and quantities. It cares about what works in the real world and wants to come up with useful ideas that it can put to use. Since INFPs are dominant feelers who lead with Fi, they’re Te is far less developed, and it’s more of a weakness for them than it is a strength.

4. Your Style of Sensing

An INFJ’s Se focuses on being in the moment. It’s adept at picking up on anything it can taste, touch, feel, smell, or see. Se users tend to enjoy quality possessions and well-made items, and this is certainly the case for INFJs. They don’t need a lot of nice stuff, what they do own they want to be quality. In addition, INFJs, like most Se users, love being outdoors and enjoy all kinds of beauty. They enjoy fine dining and like to see new and breathtaking places. But there Se is also a great source of stress, and they’d never do well relying on it for extended periods of time.

INFPs’ Si is on the other side of the sensing coin. Si is anchored in the past. Its users can store and recall many details quickly. They’re also good at taking care of the particulars and specifics of work and projects. Because INFPs use Si, they’re also somewhat sentimental: they may have special possessions that remind them of a deceased family member or a close friend and trigger past emotions and feelings. But the fact that INFPs have Si embedded in their personalities doesn’t mean that they thrive on taking care of the details, even though they can do it from time to time.

5. Your INFJ or INFP Approach to Closure

Perhaps the most obvious difference between INFJs and INFPs is their approach to closure. On a preference level, INFJs are judgers whereas INFPs are perceivers. Understanding this difference is a great way to know whether you’re an INFJ or INFP.

INFJs typically like to plan in advance and have decisions made. Having too many open loops in their lives stresses them out. They also like routines, albeit they’ll change them up to some extent periodically in the search for newer and better ones. While INFJs enjoy novelty, they usually don’t enjoy it to the same extent that INFPs do.

INFPs, as perceivers, like to keep their schedules open-ended to some extent. They usually don’t make too many decisions ahead of time for fear that they might miss out on the best options. While they may also have learned to incorporate routines and structure into their lives, it comes less naturally to them. And INFPs do like to explore and try new things – especially as they continue to develop their Ne in their teens and later in their lives.

One fantastic way to pin down whether you’re an INFJ or INFP is to figure out what your greatest strength is. Kudos to AJ Drenth of personalityjunkie.com for this insight.

An INFJ’s greatest strength is his or her Ni. INFJs are first and foremost learners, synthesizers, pattern seekers, and creators. They have a voracious and insatiable desire to understand the world. They love to learn. They also love to figure out what makes other people tick and appreciate the variety of personalities for their differences and the “superpowers” each brings to the table. The fact that they use Ni tends to make them subject area experts on one or a few topics that they research to great lengths for extended periods of time. But this is not to say that they don’t know a good deal about a lot of topics because they usually do.

As Ni users, INFJs excel at discerning what other people are thinking and feeling even when others try to conceal their thoughts and feelings. Because they pair Ni with Fe, they’re tuned into others and are quick to interpret and draw conclusions from past decisions, patterns of behavior, vocal tones, facial gestures, and other imperceptible data. They seem to be able to, at times, “read people’s minds” – or at least have a good idea when others are feeling a certain way and not being real about it. Finally, because of this pairing of mindsets, or cognitive functions, INFJs tend “absorb” other people’s moods. When they’re around others, they usually can’t help but feel the way those other people feel. I, for instance, have a hard time being around my wife when she’s discouraged and depressed and not becoming down or blue myself.

An INFP’s greatest strength is his or her Fi. Fi is an incredible moral compass that makes it extremely difficult for an INFP to make a decision contrary to what he or she thinks or feels is right. Dominant Fi users (INFPs and ISFPs) tend to understand and knowing themselves, their desires, feelings, and needs quite well. INFPs make great advocates for the underdogs and leaders of important causes too.

Because INFPs introvert their feeling, they seldom express it in communication except with their closest intimates. But they do long to give voice to the core of their personalities, and they usually do this through original art or ideas. They’re happier when their creations reflect who they are and what they care about, while also serving and benefiting others.

One of the best ways to determine whether you’re an INFJ or INFP is to consider your Achilles heel – and every personality type has one. (This is another great Drenth insight.)

An INFJ’s Achilles heel is Se. If you struggle to be in the moment and focus on what’s around you and find that your mind is always pondering theory, thinking about the future, reflecting on a deep question, or analyzing a past social interaction when you should be tuned into the “here and now,” then you’re probably an INFJ. I once tried to eat a brownie and focus on the taste to show my ISTJ wife that I could appreciate and care about the things she does, only to lose myself in musings about ESTPs and ESFPs and the way each type uses Se. And when an INFJ is stressed out, he or she will abuse Se by overeating or undereating, binge-watching TV or YouTube, over-focusing on details, or zeroing in on sensual things.

An INFPs Achilles heel, however, is not Se but Te. Most INFPs I know hate systems and rules that confine them and limit their freedom. They struggle to abide by the rules – especially the ones they don’t believe in. Sometimes, they intentionally “buck the system,” and other times they do it without even knowing it. The INFPs I know have a hard time estimating how much time they’ll need to prepare for an event or get ready for a project or how much food they should buy for a party. They usually either overestimate or underestimate. When under stress, INFPs may go into a frenzy of cleaning and organizing, two things they don’t care for most of the time.

Want more insight into whether you’re an INFJ or INFP? Check out this video.

So what do you think? Are you an INFJ or INFP?