“Am I an INFJ or ISFJ?” Have you ever asked that question?

When you’re initially trying to figure out which personality type fits you better, it can be a bit confusing – especially if you’re relying solely on the preferences (e.g. I/E, N/S, etc.).

If you look a bit deeper, and keep in mind a few general tendencies and patterns that are true of each type, figuring out which you are becomes a bit easier.

To that end, let’s take a look at several differences between INFJs and ISFJs to help you tell which you are. 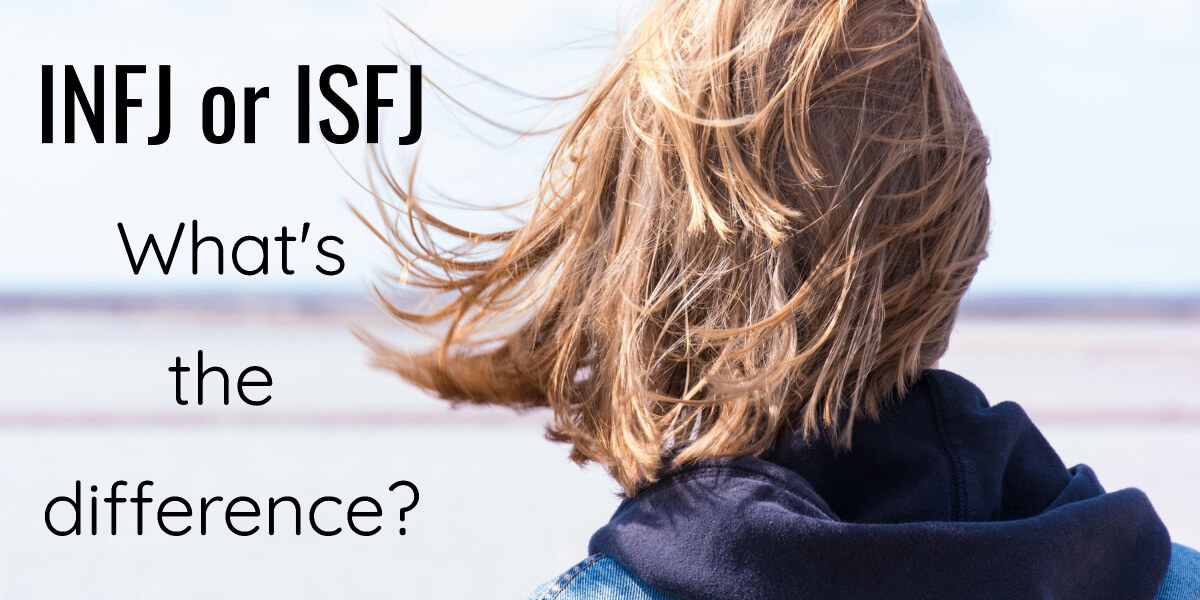 1. How do you approach the world?

A Bit of Background…

Most people know about the preferences, but most people don’t know that each of the 16 Myers-Briggs personalities has something called a function stack. A function stack is made up of four cognitive functions, or mental processes, that color the way you gather and organize information and make decisions. You can think of them as different color lenses through which people see the world.

There are eight cognitive functions in all. To know them is to understand a good deal about what motivates you and others. And they can be extraordinarily helpful in determining whether you’re an INFJ or ISFJ.

Additionally, the four functions in the INFJ and ISFJ personalities occur in a hierarchy from strongest (Dominant) to weakest (Inferior). So the first function, as the predominant part of each personality, tells you quite a bit about any one person or personality type.

As a reference for the rest of this article, here are the INFJ and ISFJ function stacks. 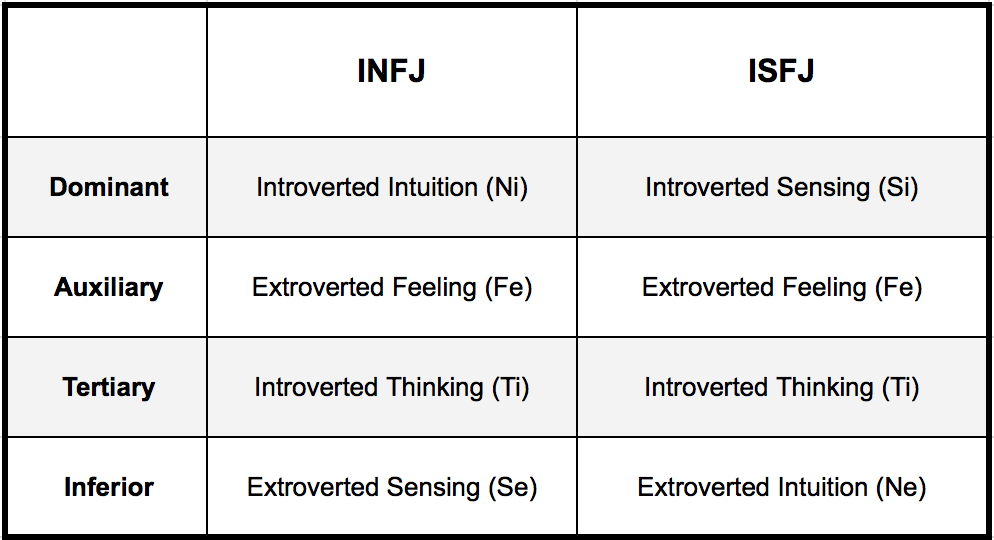 INFJs, as dominant Ni users, love to see the big picture and excel at doing so. They want to know how the world works, and they tend to miss the trees for the forest. They generally think and speak in metaphors, make connections easily, and are quick to recognize patterns. INFJs are future-oriented and love seeing transformations in themselves and in others.

ISFJs, by contrast, miss the forest for the trees They spend most of their mental energy in the past or the present, and they have an amazing ability to recall specific memories, especially memories they shared with friends or family, in great detail. An ISFJ can virtually relive an event with all of its sights, sounds, smells, and tastes just by thinking about it.

ISFJs speak in specifics – think fives senses – and in practical, down-to-earth language. They’re also walking databases for specific facts about people. You don’t have to worry about them forgetting your birthday, favorite food, or hobbies.

A huge difference between Ni and Si is that Ni users love theory, whereas Si users prefer the practical world. Though both personality types may dabble in theory or the real, hands-on world, INFJs will by far prefer working with ideas, concepts, theories, and words, while ISFJs will stand out when taking care of and remembering practical details.

To give you an example, my colleague at the school where I teach is an ISFJ and I’m an INFJ. She tends to pick up on what students are wearing, the specific words and phrases they use, and how they were carrying themselves, among other things. I on the other hand often overlook the details she sees. I, instead, get a clear hunch as to whether something is different or amiss with students. I also tend to gravitate toward new, innovative solutions and enjoy learning new skills, while she prefers tradition and using her favorite skills.

2. Do you dream up or participate?

Another core difference that’ll help you determine if you’re an INFJ or ISFJ is whether you dream up new ideas or participate in what others are organizing. And these difference can be attributed to Ni and Si as well.

ISFJs are master participators. They’re happiest when they’re involved in the scrapbook committee, the PTO, the Bible study, the yearbook team, and more all at the same time. Immature ISFJs may let others take advantage of them and burden them with more than they actually want to do, but most ISFJs love to be engaged in a heap of behind-the-scenes work that helps others.

INFJs, on the others hand, will participate in groups and do so faithfully, but they’re happiest dreaming up original ideas that help people. They’re imaginative thinkers and visionaries who get energy when starting something new that can make a big difference in the world. INFJs tend to think globally too. While INFJs come in different varieties, most do enjoy an original, private project and, unlike ISFJs, find a lot of pleasure in working on it by themselves.

In their heart of hearts, most ISFJs long to be part of the tribe, whereas INFJs enjoy being unique and one-of-a-kind. And that’s not to say that both types don’t need people, a sense of belonging, and the feeling of uniqueness – because they do. It’s just that some things are more important to each personality type than others.

3. What are your superpowers?

I already touched on these, but they bear repeating. ISFJs excel at the details. They can recall conversations with word-for-word accuracy at times, and they can visualize people and places with great clarity. INFJs, on the other hand, have uncanny impressions about others’ motives and deep “Ahas!” and insights about the world that tend to be accurate. (For more on INFJ superpowers, read this post.)

While ISFJs and INFJs share a proclivity for faithfulness and dependability, ISFJs take the cake in this department. An ISFJ’s word is often as a good as a signed legal document. INFJs are exemplary in their determination to work for the good and personal growth of others. They also stand out when helping others identify and work through deep challenges or understand themselves in order to pursue growth.

The fact remains, however, that both types love helping others, promoting interpersonal harmony, and encouraging others to grow – but they pursue these ends in different ways.

As I mentioned before, ISFJs and INFJs may dabble in theory or details, even when it’s not their forte, but they’ll seldom be happy exercising their inferior functions for more than a little while.

Extroverted sensing (Se) is INFJ’s inferior function, and it’s an Achille’s Heel of sorts. If you leave an INFJ to his or her thoughts, research, creative projects, ideas for the future, and so on, he or she will be happy. But if, all of the sudden, the car needs a new tire, the bills need to be paid, taxes are due, the house must cleaned, and Johnny is sick, an INFJ will feel more than overwhelmed. As Dave Powers points out in this interesting video, these present-moment interruptions rip the INFJ out of his or her preferred world and force him or her to focus on his or her weakness.

On the opposite end of the spectrum, an ISFJ would probably feel at home taking care of such practical details. If you want to make him or her feel overwhelmed, however, force him or her to take philosophy, psychology, and anthropology courses that have little to do with his or her real-world plans at the same time. Then, put him or her in a position where he or she has to do a lot of writing and original content production each and every day. Make long-term planning an integral part of his or her work too. In short, ask him or her to use the inferior function – extroverted intuition (Ne) – frequently.

So which fits you best?

Determining whether you’re an INFJ or ISFJ can be a bit tricky, seeing as both types prefer introversion and judging – and they also share auxiliary and tertiary functions. But hopefully, this foray into the dominant and inferior functions has helped you confirm your type.

So how did you determine you were an INFJ?