INFPs are one of the rarer introvert personality types, making up about four percent of the population. Because they are artistic, sensitive, nonconformists, they’re also quite unique. Over the past 10 years, I’ve gotten to know a few INFPs decently well. And I can attest that there’s a lot to love about these one-of-a-kind introverts.

Here are 7 reasons I love the INFP personality type. 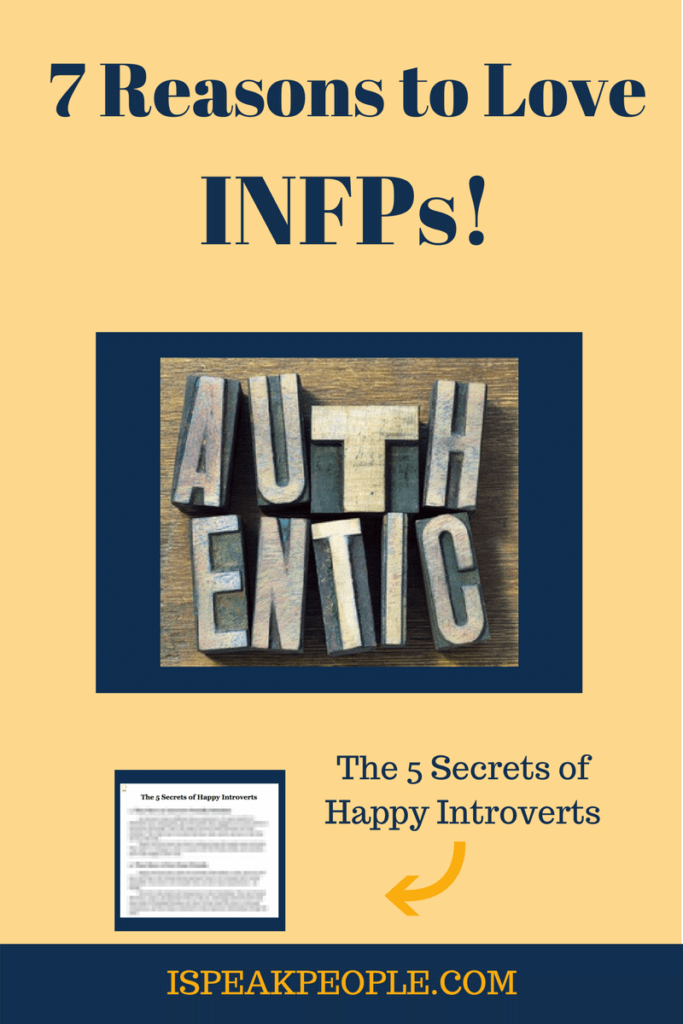 1. They have a deep appreciation for emotions.

When I say that INFPs have a “deep appreciation for emotion and feelings”, I’m NOT saying they’re sentimental messes. What I am saying is that, more than any other personality type, they have an incredible ability to tune into other people’s feelings. INFPs sense and feel things that many personality types never will.

This sensitivity to feelings is beneficial in several ways. First, it yields some pretty incredible art, for much original art is born of authentic feelings. Second, it affords an INFP the unique ability to feel what other people are feeling. They’re able to genuinely empathize with people in heart-felt ways. Who among us wouldn’t appreciate someone who’d commiserate with him after a breakup, the death of a loved one, or a lost job?

This December, I listened to The Road Back to You, by Ian Morgan Cron, a book about the Enneagram. The Enneagram is another personality type system that predates the Myers-Briggs. It’s comprised of 9 types called by their numbers (e.g. ones, twos, threes, etc.). From what I gleaned, fours resemble INFPs in a lot of ways.

One of the author’s main observations about fours is that they don’t mind being in a melancholy mood. They actually enjoy the lows of the emotional spectrum. Where other types hate feeling low or almost depressed, they sometimes savor the experience and do a lot of good work in a melancholy state. So if you know an INFP who enjoys melancholy music, dirges, and deep reflective questions, don’t give him a hard time about it. He’s a true friend who will stand by you, even when you’re feeling down.

INFPs are some of the most creative people on the planet. Poetry, art, music, and dance are in their blood. An INFP craves authentic self-expression, and that craving expresses itself in works of art.

In College, I had the privilege of rooming with a film major. Time and time again, he’d dream up imaginative screenplays and capture breathtaking footage for his class projects. Even in his free time, that same roommate loved to be creative. Once, he snuck out on our dorm-room awning to play his saxophone in the light of a full moon.

Different INFPs display their creativity in different ways. Some do it through music, as did Bob Dylan. Others express themselves through writing, like C.S. Lewis. Still others enjoy creative problem-solving in their corporate jobs. You can be sure of one thing: If an INFP’s day job doesn’t afford her a chance to be creative, she’ll exercise her creativity in her free time.

As perceivers, INFPs have an incredible capacity to accept perspectives different than their own. Unlike judgers, they’re not constantly trying to fit the world into boxes and make everyone around them color inside the lines. They’re more concerned with understanding where other people are coming from and appreciating them for who they are.

As a result, INFPs have a talent for understanding what makes people tick. For that reason, they’re one of a few personality types especially drawn to the Myers-Briggs. And they’ve also got a disarming presence about them. You can almost always openly and honestly share your perspective with an INFP without fearing judgment.

As introverts, INFPs listen more than they talk – at least when they’re not in the presence of their closest friends or in a position where they need to talk (e.g. leadership). And they’re great at it. Their acceptance of others, empathy, varying interests, and life experiences make them great counselors, whether they counsel vocationally or avocationally.

One of my favorite professional counselors happens to be an INFP. He’s an incredible listener with vast life experience, thorough training, and a genuine concern for others. He offers great advice. I love meeting with him because I never feel looked down upon when I share what I’ve been wrestling with. Rather, I leave feeling understood and built up.

And that’s what you get from these great people.

This character trait may or may not drive you nuts, depending on your personality type. As perceivers, INFPs like to take life as it comes. While they can learn to implement and follow schedules and routines, doing so doesn’t come naturally to them.

Recently, I’ve been listening to a lot of ProBlogger podcasts by the creator of ProBlogger.com, Darren Rowse. Several times during his podcast, Darren has explained that he’s an INFP and, as such, prefers to dream, have fun, enjoy new experiences, and take things as they come. He’s learned, however, that in order to be successful as a professional blogger, he had to create a schedule and routine to hold himself accountable for getting things done.

And that’s true of most perceivers. If they don’t have schedules – and deadlines, in particular – they’ll likely keep putting projects off and never get anything done. The pressure that comes when the timer is ticking down to the due date is what energizes them to get the job done.

At their core, INFPs are dreamers. They can create entire worlds in their minds. A lot of the greatest works of fantasy were born in INFP minds. Don’t believe me? Just Google INFP authors. You’ll be stunned.

But the ideas an INFP generates aren’t limited to fiction. They can be phenomenal philosophers and big picture thinkers too. In fact, if you need help brainstorming in general, you might consider putting your head together with an INFP, as long the kind of brainstorming you want to to do has a creative bent to it.

What most people find out about INFPs before they get to know them on a personal level is that they’ve got a tremendous capacity for creative problem solving and brainstorming. This is their extroverted intuition (Ne) at work. Extroverted intuition scans environments for new and interesting ideas to pursue. So, with this function driving a lot of their thinking, INFPs brainstorm almost effortlessly and with great enthusiasm.

What do you love about INFPs? Or why do you like being an INFP?

Add your thoughts to the comments!