What’s the best approach to networking for introverts?

A few years ago, I went walking with my father-in-law. While the two of us were strolling through his neighborhood conversing, he suddenly shouted to a neighbor across the street.

He’d spotted a For Sale sign in the neighbor’s lawn. So he began asking the man questions and making small talk about real estate. I’m pretty sure the two hardly knew each other; the neighbor lived on the other side of the development.

Why would anyone want to strike up a conversation with a relative stranger? I thought. What was completely natural for him gave me the jitters.

If you’ve talked with anyone about networking, you’ve probably heard the popular advice:

While that’s good advice for an extrovert, it’s no help to introverts.

But what if there were a different way to network? What if you could be yourself and meet new people?

Take a look at 11 of my top tips on networking for introverts. 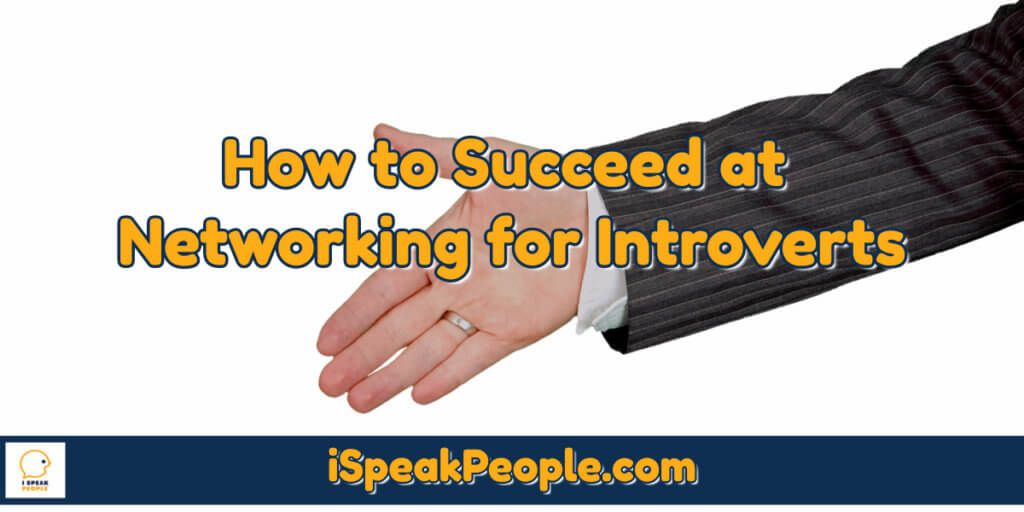 There’s comfort in companionship. The next time you attend a networking event consider inviting a friend or colleague.

The next time you attend a networking event consider inviting a friend or colleague. Click To Tweet

The two of you can encourage and challenge one another:

Or touch base periodically to exchange progress reports, while flying solo the rest of the time. Either way, a partner can propel you to greater networking success.

2. Find out what other people want to talk about.

One of the best ways to make a lasting impression on another person is to shine the spotlight on him. That’s what relationship expert Leil Lowndes teaches in her book How to Talk to Anyone. Find out what your conversational partner wants to talk about, and take a genuine interest in what he has to say.

Try one of these questions:

Really pay attention to what he’s saying, and ask questions that get him to tell you more. Introverts are great a listening, so make the most of your abilities.

3. Change the way you talk to yourself.

We all talk to ourselves. So what are you telling yourself about your networking potential?

If you hate networking, you’ve likely been beating yourself down for your perceived inability to connect with strangers.

When you start talking trash, change your inner tape. Tell yourself, instead:

Steve Siebold says, “The masses are victims of their own thoughts. They have the same potential for greatness as the pros do, yet are simply not paying attention to what they are allowing to enter their minds.”

4. Practice in your comfort zone.

You need confidence in your interpersonal abilities in order to network. And practicing your skills with friends and family is a great way to build it.

Spend some time researching icebreakers, conversation starters, and questions. Then, try them out with the people you know. Ask for feedback, and note what works.

Then, rinse and repeat. Networking for introverts starts where they’re comfortable.

Networking doesn’t have to be formal. Opportunities to connect with other people are all around you. Every time you meet someone new, it’s an opportunity to network.

When your confidence starts building, keep stretching yourself. Talk to people at the grocery store, gas pump, the gym – wherever you are. Make the most of your daily comings and goings.

You never know what could happen if you just say, “Hello.”

You’re not an extrovert, so don’t pretend to be. As an introvert, you don’t get energy from meeting new people. That sort of thing drains you.

To guard your energy, figure out how frequently you can afford to attend a networking event. Quarterly? Once a month? Biweekly?

Then, decide how long you’re willing to stay at an event. If you only have energy for an hour, don’t let anyone cajole you into staying longer. Or you’ll train yourself to dislike networking.

When you step outside your comfort zone, you need to celebrate. Over time, you can change the way you feel about networking by rewarding yourself for your efforts.

Over time, you can change the way you feel about networking by rewarding yourself for your efforts. Click To Tweet

It doesn’t have to be expensive. Just make it something you enjoy.

Taking risks and stretching yourself is easier when you know you’re going to get rewarded.

Introverts are thoughtful listeners and writers. Take advantage of your strengths.

No more than a few days after an event, write a letter to a new contact you made. In your note, sprinkle in details from your conversation. The recipient of your letter will be impressed by how well you paid attention.

Devora Zach says, if possible, pass along some information or a contact that could help the person out. These small efforts will go a long way in establishing a solid relationship.

Starting conversations with complete strangers is difficult and draining. Why not get them to talk to you?

Leil Lowndes says you can encourage other people to start a conversation with you by wearing something interesting. Sport your favorite pin, a unique tie, or funky socks. They’re easy to talk about.

I’m 6’8”. People are always asking me, “Do you play basketball?!” My height is a great conversation starter. I’ve met a ton of people because they couldn’t resist curiosity.

A whatsit will do the same for you.

If you feel awkward when you’re networking, don’t fret. Give yourself permission to feel that way.

People, like rubber bands, are “useful only when they’re stretched!” That’s what John C. Maxwell says. And any time you get out of your comfort zone, you’re going to feel awkward.

Instead of interpreting the feeling as a sign you’re out of place, view it as confirmation you’re taking necessary steps of growth.

If you’re out networking, using and developing the skills you have, you’re going to get better. There’s no losing.

If you’re out networking, using and developing the skills you have, you’re going to get better. Click To Tweet

You’ll improve with each exchange and continue getting better, as long as you keep learning and practicing. Stick with it!

What are your top tips on networking for introverts?