Would you like to improve your small talk skills?

Many introverts don’t enjoy talking with people they don’t know well about topics they’re not interested in. They’d rather spend time with someone familiar talking about their passion.

No matter how much you dislike small talk, there are times you’ll have to engage in it. It’s a social custom and a good one in that it allows you and an acquaintance to build trust.

Try these quick hacks to improve your small talk in seconds. 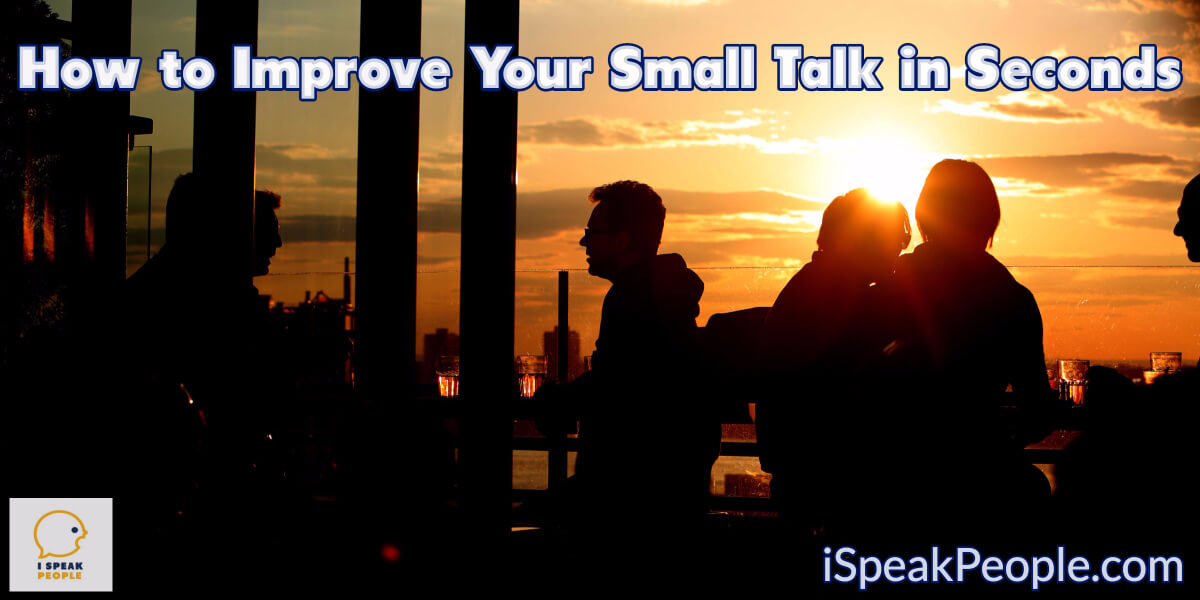 1. Remember that other people don’t think you sound as bad as you think you do.

As an introvert, you are acutely aware of your thoughts, and you carefully monitor each and every word that comes out of your mouth. So when you make a “mistake,” say something awkward, or have too many pauses in between your thoughts, it pains you and really throws you off.

It’s helpful to remember that the people you talk to aren’t nearly as tuned into what you’re saying as you are. They’re probably thinking about their own thoughts or something else more than their judging you for what you’re saying. People are distractible and may be thinking about responsibilities, who they’ll talk to next, or what’s going on around them.

2. Tell yourself something positive.

Paul Tripp says, “No one is more influential in your life than you are, because no one talks to you more than you do.” What are you telling yourself?

We all have a mental track playing in our head, and it’s either telling us something positive or negative about our social skills and small talk. For those of us who lack confidence in our small talk abilities, we’re probably telling ourselves something discouraging such as, “You’re so awkward! You can never think of what to say. Who would want to talk to you?!”

Don’t allow the negative track to play anymore. Replace them with something positive and truthful such as, “I’m an enjoyable person to talk to with good things to share, and I’m getting better at off-the-cuff conversations.”

When you talk to someone for the first time, strive to find what you have in common with him. This is one of the tips John Maxwell shares in his book Winning with People.

You and every other human being have at least one thing in common, even if it’s just the fact that two of you are both homo sapiens breathing oxygen. When you’re talking to someone new, try to identify and discuss…

4. Choose to evaluate yourself over time – not just in the minute.

Instead of letting introspection go bad and mentally beating yourself up during a conversation, evaluate yourself over time. Compare your social interactions from a month ago with yours tonight instead of trying to evaluate tonight’s interactions in isolation. Look for evidence of growth rather than expecting instant perfection. You may want to track…

5. Give yourself the freedom to fail.

You don’t have to be perfect, and you’re not going to be. We put a lot of pressure on ourselves to relate smoothly to others, but our social exchanges never happen quite the way we want them to. We say something we think is stupid or forget to say something we wanted to say. Maybe we freeze up altogether and embarrass ourselves. Decided to give yourself some grace, and choose to relate to other people despite how you feel.

I listened to a Pro Blogger podcast with Darren Rowse last night. He was saying that he hates meeting new people and that doing so scares him to death. At a conference he once attended, a speaker asked him and all the other people listening to turn and talk to their neighbors. Even though Darren didn’t want to, he forced himself to talk to the stranger beside him, and he was so glad that he did. In his words, “Sparks flew,” and the person he talked to ended up becoming a business partner.

You never know what might happen if you put yourself out there and talk, so give yourself the freedom to make mistakes.